This project has received funding from the European Union’s Seventh Framework Programme for research, technological development and demonstration under grant agreement no 607729.

WP3 and WP4 workshop and consortium meeting in Paris

On the 20th and 21st of January 2015, a consortium meeting was held at the location of SAGEM, south of Paris.  The main aim was to discuss the results of the work package WP2 (User Requirements Analysis, System Analysis and Design), and to have kick-offs for work packages WP3 and WP4.

State of the deliverables of the WP2 was discussed, and the still remaining issues were identified. The appropriate actions were planned to address these issues.

There were three final deliverables targeting the following subjects:

All three deliverables were submitted, and currently one waits on the feedback from the project officer.

Additionally, the scenario “to-be” was presented (by Italian partners) and discussed. A more detailed view of the tasks in the scenario is going to be delivered, including the information related to partner responsibilities.

Work package WP3 was initiated by the lead partner SAGEM. The main tasks were presented, and for them to be implemented there was a need to identify correct relationships between the different C2-SENSE components (see the following figure). In this way, it would be possible to assign development priorities to the components. 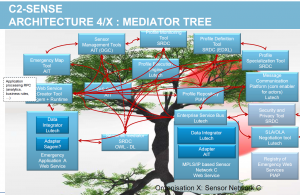 Mediator Tree for the C2-SYSTEM components.

WP4 was initiated by PIAP, and the discussion regarding the two WP4 tasks followed. The main thread was related to operational alignment among authorities, and their emergency management partners, nationally and internationally.